It has been over a decade since the first iPad was introduced. Over the years, Apple consistently bumped up its specs with each iteration. What didn’t change much, however, was the underlying display technology. Since 2010, Apple has relied on LCD screens with LED backlight for its iPad lineup. So when rumors of the Cupertino-based company embracing the mini-LED tech surfaced in 2019, fans were psyched. Websites dedicated to Apple news were quick to draw comparisons between mini-LED and OLED. Some even went as far as calling it the dream screen, and a best reason why you should buy the latest iPad Pro.

However, as the device shipped, users began complaining about a weird blooming effect on the display. Many consumers canceled their orders and even the ardent supporters described it as a “mixed verdict on mini-LED”. What exactly went wrong with Apple’s mini-LED display that was supposed to compete with the OLED tech? 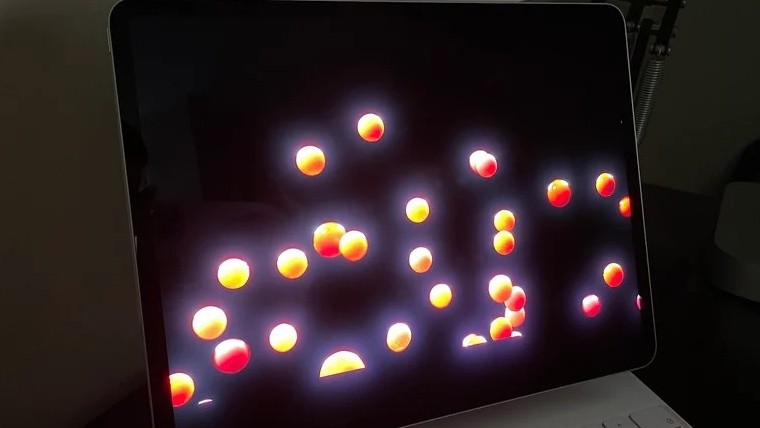 Here’s my experience with the blooming on the M1 #iPadPro so far. It’s very noticeable in dark room with UI elements on top of a black background, but that’s the only scenario where I really notice it. It’s expected with this display tech but still jarring coming from OLED. pic.twitter.com/8tG1euFzqn

Key differences between LCD and OLED

OLED along with the good old CRT and Plasma tech are emissive displays where each pixel is self-illuminated and can generate colors. Since the other two technologies have been phased out, we will focus on OLED to get the point across. These panels can selectively turn off pixels to render inky blacks on the screen. Since they do away with the need for backlighting, OLED screens don’t suffer from patchy brightness and light bleeding.

On the other hand, LCDs rely on backlight filtered through a layer of liquid crystal molecules, color filters, and polarizers to form an image. This particular process of rendering an image is lossy and comes with undesired side-effects such as uneven brightness, narrow viewing angles, and backlight bleeding. The biggest issue, however, is the inability to render proper blacks.

For instance, if you’re watching Gravity (2013), the vastness of dark space will be rendered faithfully on an OLED screen. However, on an LCD screen, the panel’s layer of liquid crystals won’t be able to block backlight 100 percent. As a result, space will look more like a dark shade of grey instead of jet black.

To get around this shortcoming, manufacturers squeeze in more LEDs in their displays to get more granular control over backlighting. On expensive LCD panels, you get Full-Array Local Dimming (FALD) as opposed to the widely used Edge LED arrangement. As shown in the image below, a FALD display can pack in several hundred to thousand LEDs compared to a few dozen in a conventional LCD panel. More importantly, FALD panels can selectively dim or brighten up LED zones as per requirement.

How blooming comes into the picture

While this backlight technology improves an LCD’s ability to produce blacks, it introduces a new issue known as blooming. This happens when the light meant for bright objects on the screen spills over the dimmed zones. Honestly, you can’t expect otherwise when your Full HD FALD screen has a whopping 2,073,600 pixels (1,920 x 1,080), but only a few hundred dimming zones.

Mini-LED panel type takes it to the next level by packing in smaller LEDs in large numbers. Made possible by some impressive miniaturization engineering, this technology was first popularized by TCL on its TV line-up. For the latest iPad Pro, these mini-LED modules are manufactured by the Taiwanese company Ennostar. According to Apple’s Director of HW Technologies, Heidi Delgado, the latest iPad Pro display has over 10,000 LED backlights and around 2,596 dimming zones. These mini LEDs are said to be over a hundred times smaller than the conventional ones. Since Apple hasn’t shed much light on the underlying tech, here’s a comparison image from TCL to put things in perspective.

At its core, the mini-LED panel is still an LCD with more refined backlighting. It is like a FALD LCD on steroids, which vastly improves the panel’s contrast ratio. As highlighted in most reviews, the latest iPad Pro is undoubtedly very good at rendering deep blacks. However, along with amplifying FALD’s best characteristics, mini LED also boosts its problems.

The iPad Pro (2021) has a screen resolution of 2732 x 2048, which translates to 55,95,136 pixels. While delivering 2,596 dimming zones is certainly an improvement, it is still not adequate for 5.6 million pixels. The display’s 1,000 nits brightness, which is generally a good thing, also enhances the blooming artifacts. This issue didn’t plague the previous-generation iPad Pro, because it had a paltry 72 LEDs. Sure, the low density of LEDs led to poor rendition of blacks but it also defused the backlight intensity over a larger area. Thus, avoiding the blooming artifact.

Can Apple fix this issue?

On the new iPad Pro, the blooming issue isn’t noticeable while browsing the web, writing an email, or shopping on Amazon. It becomes jarring only when there are white objects or UI elements against a dark background. However, that’s still frustrating for anyone who has spend over $1,000 for this product. It is strange that Apple failed to detect this issue during internal testing.

Even if Apple eats the humble pie, don’t hold your breath for the company to patch things up over a software update. The only thing it can do now is to cap the brightness to make the blooming slightly less jarring. If the firm wants to ensure this issue doesn’t crop up in future iPads, it will have to make a switch to OLED screens. With the price of current generation iPad Pro 12.9″ starting at $1,100, we don’t see why Apple shouldn’t consider that.

October 27, 2020
Join Our Newsletter!
Sign up today for free and be the first to get notified on new tutorials and snippets.
Subscribe Now
Skip to toolbar